There are many countries around the world and God loves people everywhere.  Japan, though, is a much forgotten and desperately needy mission field.  You would be hard pressed to find a greater need.  With more than126 million people (the world’s 10th largest country by population), Japan is listed by the Joshua Project as one of the the world’s largest unreached countries.  The Japanese people, themselves, are one of only two people groups in the world greater than 100 million, who are still considered unreached.  Church attendance in all protestant churches in Japan is only about 2 out of every 1000.  Church attendance in Evangelical churches is probably less than half of that or less than 0.1 percent.  I have 8 children.  All of our children, except the youngest are attending public schools.  Do you know that none of my children have ever found another Christian in their schools?  Joseph is soon to start his 3rd year of college in Japan.  He’s attended 14 years of school in Japan and never found another Christian.  Our District (Tohoku) has a population of roughly twice the population of Washington state, yet the total Assemblies of God attendance for all churches combined in our district is less than 400.  Your chances of running into identical twins in America are many times greater than the chances that a Japanese will run into a born again Christian, or a Christian of any kind for that matter.

Our city, Hachinohe, has a population of about 230,000.  There are 12 protestant churches and 2 Catholic churches in our city.  Sunday morning attendance of all the churches combined probably doesn’t amount to even 150 people.  Surrounding Hachinohe there are a number of towns with no church of any kind.  The town of Gonohe, for example, has a population of near 20,000 and yet there are no churches to my knowledge other than a Jehovah’s Witness Kingdom Hall.  The only exposure most of the people of that town have had to the Gospel, is a false Gospel. 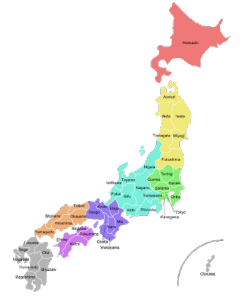 Japan is an island country off the coast of Asia.  The nearest countries to Japan are Korea, Russia and China.  More than 6000 islands make up the country of Japan, but most of the land is comprised of four main islands.  They are Hokkaido, Honshu, Shikoku, and Kyushu.  The islands stretch from 46° to 24° N. latitude.  The result is quite a varied climate from very cold, snowy winters and short cool summers in the north, to mild winters and long hot summers in the south.

Hachinohe, where we live, is on the north Pacific coast of Honshu, the largest island.  We usually have very short summers, cold winters and cool wet weather in the spring and fall.  Although we usually don’t get extremely heavy snow, we usually have from a few inches to a few feet on the ground between Christmas and March 10.  The roads are often icy.

Being made up of volcanic islands, most of Japan is rugged mountains.  Because of this, most of Japan is unsuited for human habitation, agriculture, or industry.  Approximately 73 percent of Japan is forest.  Most of the people in Japan live in the coastal areas, making Japan one of the most densely populated countries in the world.  The greater Tokyo area is the largest metropolis in the world, with between 35 and 50 million people, depending on where you choose to draw the circle.

Japan has the highest natural disaster risk in the developed world.  Japan has earthquakes every day.  Where we live it is not uncommon to have several earthquakes each month are strong enough to feel.    There are more than 100 active volcanoes.  Japanese suffer from tsunami.  Every year they are hit by destructive typhoons, floods, and landslides.

Japan has a very low violent crime rate.  Even in Tokyo you can walk around freely without fear of pickpockets or muggers.  Most people are respectful and polite.  Service in stores, restaurants, and businesses is nearly always professional.  We rarely hear of murders, shootings, or robberies.  When something like that does happen it is big news.

On the other hand, alcoholism, pornography, abortion, and teenage prostitution are big problems.  It seems, though, that for the average Japanese, they don’t see these things as being problems.  Pornography is just a hobby.  Alcohol is a way to socialize or wind down after a long day of work.  Having a mistress, even an underage girl, on the side is just a way of meeting physical needs and finding release.  Abortion is a necessary evil.  It would be worse to bring an unwanted child into the world.

For most Japanese men, a workday is very long.  It is not uncommon for Japanese men to spend 13 to 14 hours a day between work and commuting.  Even though contracts allow for vacation time, it is expected that workers will not use it.  Even though there are labor laws, they are rarely enforced.

School children also have long days.  Most schools require the students to be in sports or other club activities.  These clubs keep the children after school until at least 6 or 7 o’clock.  They practice or have games on holidays and weekends.  Most children have to go to school nearly every day of the year, if not for regular classes, for supplementary lessons and club activities.  I think that the reason for this is partly to prepare the children for the work world that awaits them in the future, and partly to keep the children supervised so that the parents can work and not worry about them.

The economic bubble burst in Japan in the 1980s.  Since that time the Japanese government has kept the prime lending rate at zero with little effect.  Recently they lowered their prime rate into the uncharted negative rates for some deposits.  Japan has the worst national debt in the world.  The Japanese debt is approximately 225% of GDP as compared to 175% for Greece and about 100% for the United States.  Japan not only has a huge national debt, but municipalities and prefectures across Japan also have insurmountable debt.  With an aging population and one of the lowest birthrates in the world, it is only a matter of time before the Japanese economy collapses.

Japanese are nearly all Buddhist and Shinto.  Buddhism for the average Japanese person is much different from Buddhism elsewhere in the world.  Most homes have a Buddhist altar where the people offer rice and pray to their ancestors.  Most Buddhist temples don’t have regular services and most Japanese don’t attend any kind of Buddhist religious services or read any kind of “Bible”.

The Shinto religion is more like animism practiced in many places around the world.  Shrines don’t have religious services, there is no Bible, there is no moral teaching, there is no salvation.  There are spirits or gods everywhere which must be feared and appeased.  These gods are not our creators.  They don’t love us.  Many of them are malevolent.  Most people have amulets in their cars from the shrine to protect them from accidents.  Most children carry amulets to protect them walking to and from school.  Businesses and homes have god-shelves where people pray for blessings from the gods and try to keep the gods happy so that good things and not bad things will befall them.

In their everyday lives, most Japanese appear to be secular.  In Japan, it is frowned on to be too religious.  Even Japanese religions are kept at arms length.  You stay close enough to keep the gods and your ancestors happy and far enough away that you don’t incur their wrath.

Since there is no concept of attending church every week, reading your Bible daily, or giving tithes to church, it is very hard for Japanese to relate to Christianity.  Japanese generally believe in an afterlife, but they assume that except for murderers and the like everyone goes to paradise.  It is very difficult for them to understand that we are all wicked sinners in need of forgiveness.  Since religion is something to be kept at arms length, Christianity is foreign and they are Buddhist, Japanese are very hesitant to even visit a church.  Although some will accept a personal invitation to come to a concert or special Christmas service, it is very hard to get them to move from that to attending weekly and giving their lives to serve the Lord.  Part of this resistance is fear of what others will think of them if they get “duped” by religion.

In 28 years of working in Japan, the only effective means of spreading the Gospel that we have found is one at a time.  Usually this requires years of cultivating a relationship before there is even an opening to talk about Christ.  We have passed out tens of thousands of tracts and seen zero visible results.  Still, we know that God loves these people and he holds the key to their hearts.  The church needs to pray that God will break down the barriers so that the Gospel can spread in Japan.